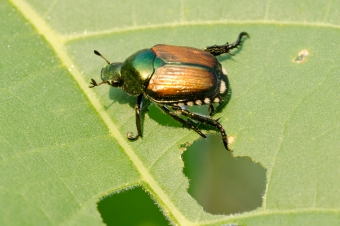 Japanese beetles are voracious eaters and can completely decimate a garden if left to their own devices. To minimize or even prevent the damage these creepy-crawlies can do, try planting plants that deter them, or that they don't feed on.

With a combination of the above plants, you should be able to stave off, or at least minimize, the effects of Japanese beetles in your garden.

If you need more help dealing with Japanese beetles in your garden, pay us a visit at the Country Basket Garden Centre for some tips and insights from our team!

At Country Basket Garden Centre, we stand behind our products.

Did you know you can earn Basket Bucks on every purchase... and redeem them in our Garden Centre on regular priced and sale items?

Ready to pick out the PERFECT Christmas tree for your home but...you aren't ready to take it home right now? No problem! At the Country Basket Garden Centre you can reserve a Christmas tree now and pick it up later!

Why Gardeners Love Our Store

Whatever you need, whether it's seeds, plants or information, our team of gardening experts is here for you!